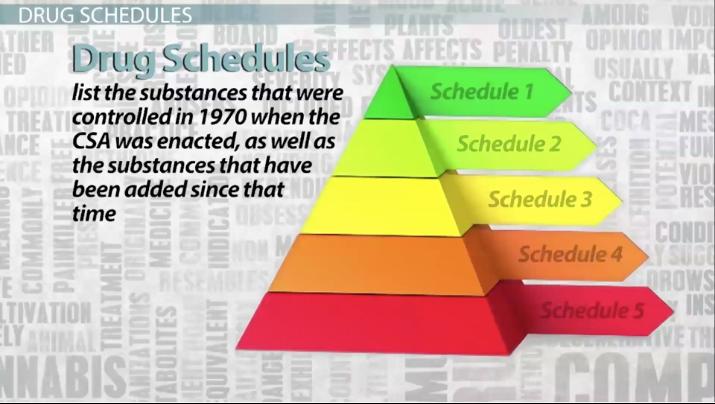 Most states, including the State of California classifies drugs, substances, and certain chemicals into five distinct categories or schedules depending on whether the drug is considered acceptable for medical use, and the potential for the abuse and/or dependency. The government considers the abuse rate as one of the strongest factors in determining the classification of the substance.

All drugs are classified as either a Schedule I, II, III, IV or V substance. If any of these scheduled substances are possessed without a prescription, there is potential for criminal prosecution. The penalties and consequences are determined by several factors including the schedule the substance falls under, the amount and circumstances of the possession. Depending on the situation, an attorney who is knowledgeable in drug possession cases may be able to assist in determining the consequences of a drug possession arrest and potential prosecution.

Schedule I substances have the highest potential for abuse, and the potential to create severe psychological and physical dependence in the user. The government also defines Schedule I Substances as having no current acceptable medical usage. Some examples of a schedule one drug include heroin, lysergic acid diethylamide (LSD), marijuana (cannabis), 3,4-methylenedioxymethamphetamine (ecstasy), methaqualone, and peyote.

Many of these drugs are prescribed by a doctor. However, if you do not have a prescription or legally transporting the drugs with a prescription and authorization, you could be charged with a criminal offense.

The classification as a Schedule III is for substances, drugs or chemicals that have a moderate to low potential for abuse. They do not pose a significant risk for the user to develop physical or psychological dependence. An example of a Schedule III drug includes codeine, Tylenol with codeine, ketamine, anabolic steroids, and testosterone. These drugs are illegal to possess without a prescription similar to Schedule II drugs.

The final classification of chemicals, substances or drugs fall under Schedule V drugs. These are defined as drugs with lower potential for abuse than Schedule IV and consist of preparations containing limited quantities of certain narcotics. Schedule V drugs are generally used for antidiarrheal, antitussive, and analgesic purposes. There are a few examples of Schedule V drugs such as cough preparations with less than 200 milligrams of codeine or per 100 milliliters (Robitussin AC), Lomotil, Motofen, Lyrica, Parepectolin.

Potential Criminal Consequences & the Importance of a Good Defense

As stated earlier, if you are found in possession of any of these substances, there is the potential you will be charged with a criminal offense. Many of these substances require a medical prescription to legally possess. If you do not have a prescription, and are found in possession, it is important to contact an attorney. They can represent you in criminal proceedings and provide you with the best defense.

Under certain circumstances, an attorney may be even able to get possession of a controlled substance dismissed. It is important to contact an attorney immediately after arrest to ensure the best defense.