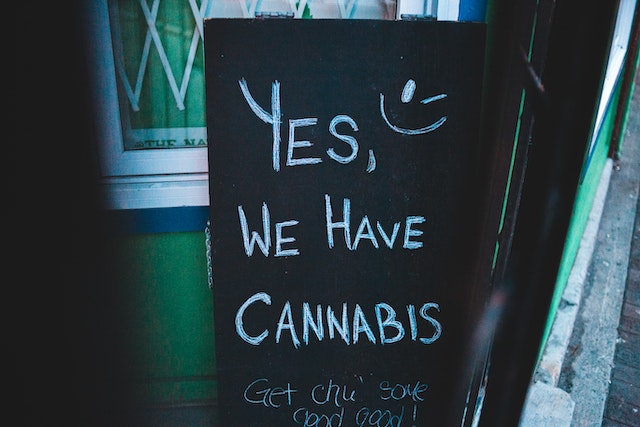 "
Board with cannabis offer
", by
Erik McLean
,
Licensed under
CC BY 2.0

Marijuana possession for sale as opposed to personal use

In the State of California, if you are found to be in possession of marijuana and there appear to be circumstances, statements, as well as evidence that may suggest to local law enforcement that you intended to sell the drugs, you may be charged. Now, this can even be the case if you didn’t intend to sell the drugs; however, amount, location, etc., certainly play a role in the decision of law enforcement and even the prosecutor’s office to file charges. Under California law, it is not illegal to be in possession of marijuana so long as you are at least 21 years of age; however, selling without a license is, in fact, still illegal.

If you possess any usable amount of marijuana (say less than one ounce), and law enforcement have reason to believe that said possession was for the purpose and intent of sale, you may be charged under California Health and Safety Code 11359. How is “intent” established? Intent may be established through things that you reported to law enforcement at the time of the engagement. Intent may be established through circumstantial evidence as well that may indicate you were planning to sell a specific quantity of the drug. How might “circumstantial” be defined? Let’s assume that during the encounter with law enforcement they secure an unknown quantity of marijuana found to be in your possession and the marijuana is tightly wrapped in plastic baggies in a backpack with a scale. You are likely to be charged with possession with intent to sell/distribute as this is circumstantial evidence despite your report.

Selling under the California Health and Safety Code 11359 refers to any usable amount that is exchanged to another for money, goods, or services. During a sales negotiation, the seller attempts to convince or “sell” the buyer on the benefits of their offer. If the buyer wishes to strike a deal, they will give the seller an agreed upon amount of money in exchange for the seller’s product/service. Put simply, selling is the act of persuading. At its essence, selling is handing over something of value in exchange for money or another item of value. But to get to the point where someone is willing to part with their money to obtain an item or service often requires persuasion.