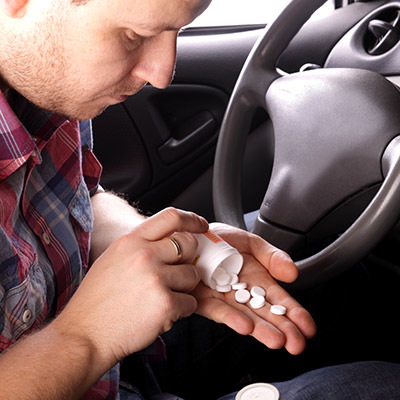 "
Drug Driving more dangerous than illegal drugs
", by
AAPMD
,
Licensed under
CC BY 2.0

Vehicle Code 23152(f) VC is the California statute that prohibits being under the influence of drug(s) whilst driving. Though drug DUIs are commonly charged as misdemeanors, one may be given more severe penalties depending on the facts of the specific situation. In this article, we will discuss the penalties one may receive for a drug DUI as well as possible legal defenses.

For first time offenders, drug DUIs are usually charged the same as regular DUIs and could result in any of the following:

If, however, a drug DUI is charged as a felony (which could occur for a few different reasons, including injury resulting from drive under the influence), you may be charged with:

Charges may be even higher if someone else was injured. This could include up to $5,000 in fines and/or as much as 4 years in jail.

‍How can I defend against a drug DUI charge?

When being put on trial for a drug DUI, you may choose from a plethora of defenses including defenses for specifically Drug DUIs or defenses that could apply to any DUI. Let’s start with drug specific DUI legal defenses. Below are some of the more common defenses.

There are certain problems that can occur when trying to prove that someone’s driving was impaired from drug use. To begin with, there are many many reasons why different symptoms commonly seen in drug users would be present in someone who is clean. For example, driving after a poor night’s rest could result in one’s ability to safely navigate without being impaired. Whilst this does show irresponsibility on the driver’s part, it does not mean they are under the influence. Another issue is that drug tests are fallible. One may test positive even without having taken any drugs, which may in certain cases be used as a defense.

This article has gone over the basics of how drug DUIs may be penalized as well as some possible legal defenses defendants may take. If you would like more information on the subject, please consider contacting us so we may discuss how you can be defended.