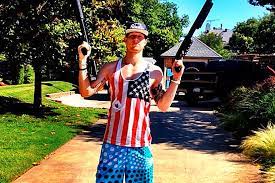 Is Brandishing a weapon a felony and what are some examples

In the State of California and in accordance with California PC 417, Brandishing a weapon is a “wobbler” offense. In other words, it is a special class of crimes involving conduct that varies widely in its level of seriousness. Wobbler statutes cover a wide range of offenses, including, but not limited to: Brandishing a weapon. Such a charge may be prosecuted as a felony or a misdemeanor.

In People v. Read (1983), Appellant, who shot and killed the victim with a shotgun in a confrontation outside a bar, was charged with murder and convicted of involuntary manslaughter. The jury was instructed that involuntary manslaughter is an unlawful killing without malice which occurs "in the commission of an act ordinarily lawful which involves a high degree of risk of death or great bodily harm, without due caution and circumspection" or "during the commission of a misdemeanor which is inherently dangerous to human life, namely the offense of threatening with a weapon, Penal Code section 417."

In the event a weapon is brandished during the commission of a felony, it often assists in the determination as to whether a defendant will be charged with a felony or misdemeanor.

When brandishing a weapon of any kind, there is a fine line between criminal intent and justified which may also impact how a person is charged. As previously established, in the State of California it is illegal to brandish a weapon. Such unlawful display that may result in a charge includes, but not limited to: A threatening display, the reason to brandish does not warrant force or deadly force, and it may be unreasonable to display. Such a justified display may include: displaying a weapon to stop an imminent threat, stop a potential life-threatening situation, or it is considered a reasonable display under the law.