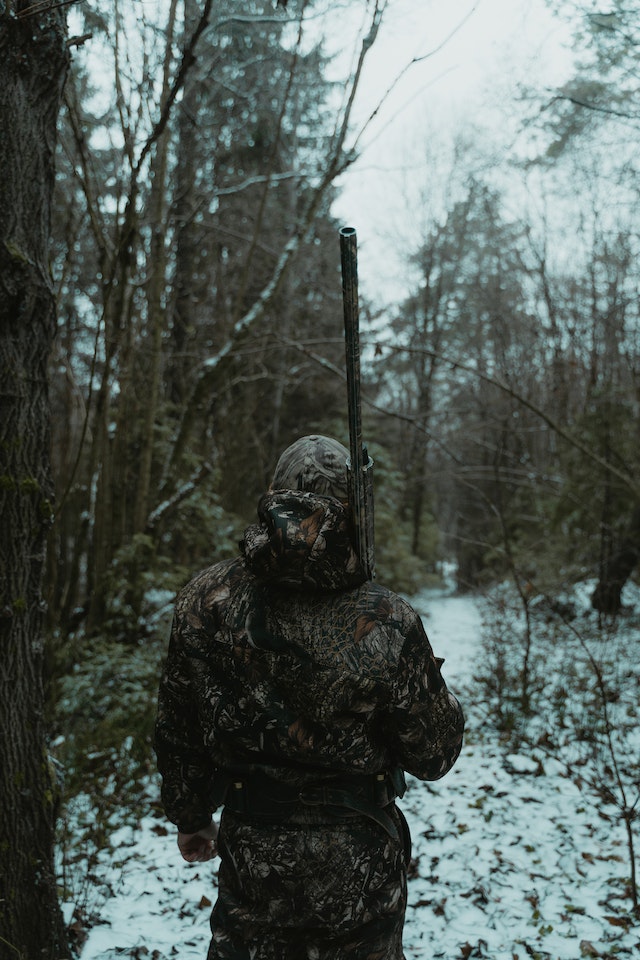 "
Back view of a hunter carrying
", by
Tima Miroshnichenko
,
Licensed under
CC BY 2.0

According to 43 CFR 8360.0-5, public land is defined as: any lands and interests in lands owned by the United States and administered by the Secretary of the Interior through the Bureau of Land Management without regard to how the United States acquired ownership.

Public lands are areas of land and water that today are owned collectively by U.S. citizens and managed by government agencies. Public lands are different from private lands, which are owned by an individual, a business or another type of non-governmental organization. Although public lands are now considered to be owned collectively by United States citizens, these lands include ancestral homelands, migration routes, ceremonial grounds, and hunting and harvesting places for Indigenous Peoples who have been forcibly removed.

Why does this matter when pertaining to carrying a firearm while driving a motor vehicle on public land? California Penal Code 25610 strictly prohibits the possession of any firearm in a motor vehicle while driving on public land unless the firearm is in the trunk of the vehicle in a locked container. More importantly, the firearm may only be carried directly to or from any motor vehicle for any lawful purpose and, while being carried must be contained in a locked box or container.

National Parks/National Wildlife Refuges: As of February 22, 2010, Section 512, Credit CARD Act of 2009 (54 USC § 104906 and Title 36 Chpt. 1 Part 2 § 2.4) took effect changing federal law to make park firearm regulations reflect state law. For example, if a state allows open carry and/or concealed carry or loaded/unloaded firearms in vehicles, carrying a firearm or possessing loaded/unloaded firearms in a vehicle is allowed in a National Park in that state.

National Forest lands do not ban firearms. States control the carrying of firearms in national forests in their state. However, as in National Parks, ranger stations and visitors centers are federal facilities and are off-limits to firearms.

Airports/Aircraft 49 CFR 1540.111 and 49 USC § 46505. Under federal law (local laws may differ), firearms are prohibited beyond the TSA checkpoints. You cannot attempt to enter a TSA checkpoint while armed, even by mistake.