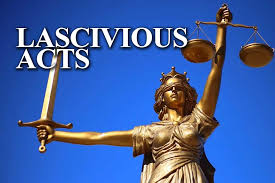 "
Lewd and Lascivious Acts
", by
Negros Chronical
,
Licensed under
CC BY 2.0

As you probably already know, law enforcement takes sex crimes against children very seriously. That is why they devote considerable resources while getting to the bottom of these types of allegations.

Many police agencies in the State of California have special units or entire departments that focus on cases that deal with the sexual abuse of children. Typically, these cases go to detectives, who have gone through specialized training and can deal with child victims.

Let’s take a look at how an investigation of an alleged sex offense against a child typically unfolds.

Practically all cases that fall under Penal Code 288 start with the accuser reporting the alleged sexual assault. However, there are cases when the child is the one that contacts the police.

In most cases, the child will first contact an adult they trust, such as a parent, teacher, or another relative, then that adult will be the one to contact the authorities.

During the next phase of the police investigation, the police will want to interview the accuser about the details of the alleged lewd acts.

Typically, these interviews are conducted by a detective with special training and experience with child victims or by a professional child psychologist. Standard practice is for these interviews to be audio or videotaped.

This is referred to as a “pretext call,” and its purpose is to enhance the probability the suspect will confess, which is why it’s always recorded.

If the police confirm that the lewd acts with the child did occur and the suspect may be considered to have pedophilic tendencies, there are chances that he/she may have other victims.

This is why the authorities try to search for all possible children who may have been exposed to the suspect’s misconduct.

Interrogation of the suspect is perhaps the most important part of a Penal Code 288 investigation. If the police manage to get a confession, then it usually seals the case. Typically, cops choose between two different interrogations strategies:

If the accused states that they did not participate in the alleged sexual misconduct, the police will require a polygraph examination.

These are conducted by a police polygrapher, in jail, or at a police station - however, the suspect cannot be forced to take the test. It’s key to remember that evidence relating to polygraphs cannot be dismissed in court. If the suspect “passes,” this may convince authorities he/she is innocent.

However, on the other hand, if the suspect fails the test, that will further convince authorities that the allegations are true.