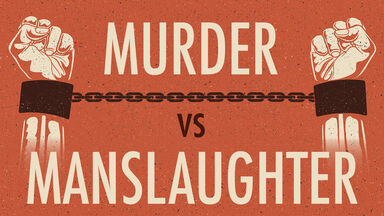 "
Difference between murder and manslaughter
", by
Grammar.yourdictionary.com
,
Licensed under
CC BY 2.0

What are the penalties and potential legal defenses for voluntary manslaughter?

While the adage “The best defense is a good offense” is typically associated with military combat and sports (and is often attributed to Michael Jordan), it was first said by George Washington in 1799, “…offensive operations, often times, is the surest, if not the only means of defense.”

As one might imagine, there are always defense options when dealing with any criminal offense, regardless of a defendant’s plea. In the case of voluntary manslaughter, and in accordance with California Penal Code 192, there are three primary defenses that are commonly used:

The State of California has three specific elements to the self-defense strategy and they are as follows:

The second category of defense is the insanity plea. In the State of California, a qualified defense attorney will attempt to show that the defendant killed another, but out of insanity. There are two primary elements of the insanity defense, and they are as follows:

Finally, the third possible defense is that of an “accidental killing.”  A defendant in the State of California may not be found guilty of voluntary manslaughter if the killing was accidental, the there are three elements of this defense and they are as follows:

Typically, the biggest question a defendant may have is: “what are the possible consequences of a finding of guilt?” First, voluntary manslaughter is a felony in the State of California. This charge may be plead down as a lesser included offense from murder, which certainly lessens the possible maximum punishment. Generally speaking, the criminal court may impose any number of prison sentences from three to 11 years. Second, a conviction qualifies under California’s “three-strikes law.” Third, a defendant will lose their right to purchase and/or possess a firearm. Finally, there may be collateral orders such as community service, required programming such as anger management, substance abuse treatment, etc.