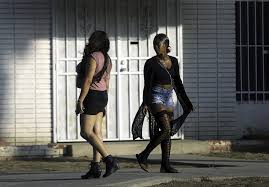 "
Prostitution and trespassing
", by
Santa Monica Observer
,
Licensed under
CC BY 2.0

Loitering in a public place with the intention to commit prostitution is a crime defined as a misdemeanor under Penal Code 653.22 in the State of California.

This offense is typically called loitering to commit prostitution or loitering for prostitution. Some examples of such situations include:

If you get arrested and convicted for such behavior, there are several penalties you might face.

Violating Penal Code 653.22 in California is defined as a misdemeanor. This means that should you be convicted of loitering to engage in prostitution, you face the following penalties:

The judge determines the exact sentence, and it depends on the details of the case.

What Are Some Common Defenses to Avoid Conviction?

Should you get convicted of a sex crime, it can potentially damage your career and reputation. That’s why you should know that there are ways to fight back. Here are a number of legal defenses that may apply to a violation of Penal Code 653,.22.

There Is Insufficient Evidence That You Intended to Commit Prostitution

Many factors can show you intended to commit prostitution. That’s why the court needs to take all the circumstances of your case into account and find enough evidence that proves that there was intent.

In many cases, a seemingly innocent situation, such as a young girl wearing provocative clothing and talking to males, may be mistaken for loitering to commit prostitution. Unfortunately, the law is worded to allow the police to arrest someone based on such kinds of harmless behavior, especially if it occurs in a neighborhood known for prostitution.

Entrapment occurs only when a police officer acts in an overbearing way while operating undercover - by applying pressure, fraud, threatening or harassing the person they are arresting. It typically happens when a law-abiding citizen is forced into committing a crime they otherwise would not have committed.

For example: Let’s say a young woman is smoking cigarettes outside a bar, where prostitutes usually loiter. Suddenly, an undercover cop comes out of an expensive car and asks the woman if she’s working. At first, she ignores him and walks back into the bar. Sometime later, she goes out again to smoke another cigarette, and the cop approaches her again, this time offering her a large sum of money so that she can sleep with him. The girl ignores him again and goes back to the bar.

After some time, the girl has been thinking about the offer and exits the bar looking for the undercover cop. At that point, he arrests her for loitering with the intent to commit prostitution. An entrapment defense can be used in this case, as the cop applied immense pressure by offering the girl a large sum of money.