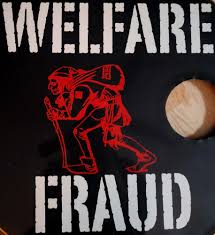 Under California Welfare and Institutions Code

"Any person who, willfully and knowingly, with the intent to deceive, makes a false statement or representation or knowingly fails to disclose a material fact in order to obtain aid under the provisions of this division or who, knowing he or she is not entitled thereto, attempts to obtain aid or to continue to receive aid to which he or she is not entitled, or to receive a larger amount than that to which he or she is legally entitled, is guilty of a misdemeanor, punishable by imprisonment in a county jail for a period of not more than six months, by a fine of not more than five hundred dollars ($500), or by both imprisonment and fine."‍

Whereas recipient welfare fraud usually involves deceit from someone outside of the government, internal welfare fraud is where someone who works within the government uses their status as a way to assign welfare to illegitimate individuals. The motivation for this crime is often that someone working for the government can assign these benefits to someone they know and keep a cut of the money gained. These kinds of crimes warrant charges for welfare fraud, embezzlement, and other possible charges.

Welfare fraud can also often involve forgery among other crimes, which is punishable under Penal Code 470 PC. Forgery often involves using someone else's name on a document (identity theft). Another example of forgery could be counterfeiting food stamps.

In cases where it is found that the accused individual is found to be the victim of identity theft or otherwise falsely identified, he/she will not be charged with welfare fraud.

This article has outlined the basic definition of welfare fraud as well as the two main types of welfare fraud (recipient and internal). Regardless of the classification of the offense, it is important that you seek the assistance of competent legal counsel to help you best understand your legal defense while identifying an outcome that best minimizes your risk. We here at the H Law group patiently await your call.