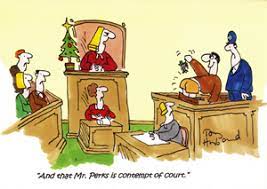 Is Contempt of Court a Crime

As per Penal Code 166, contempt of court or simply “contempt” is illegal conduct that is defined as some type of disobedience of an order of a court. Some examples of such conduct are:

Here, it’s important to note that “willfully” means that a person has committed the act, either willingly or on purpose. Additionally, while this sentence outlines many criminal behaviors, the most common violation is the disobedience of a court order.

You need to know that “contempt of court” is considered a misdemeanor that could lead to a sentence of up to six months in jail.

What is Disobedience of a Court Order?

As already mentioned, the most prevalent type of contempt of court is the act of disobedience to a court order. If a prosecutor wants to convict a person of violating a court order, he needs to prove the following:

When it comes to a defendant knowing of a court order, the prosecutor needs to prove that:

It’s vital to note that both adults and minors can be charged with violating a court order.

Violating Penal Code 166 is typically a misdemeanor that can have severe consequences. However, there are ways to legally defend yourself if you find that what you’re being accused of is unfair or incorrect.