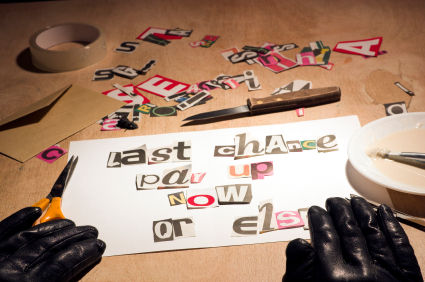 Is Blackmail a crime in the State of California?

With their high profile lifestyles, blockbuster paychecks, and status in Hollywood, celebrities are often the easiest targets for extortion and blackmail. Blackmail and extortion has been sensationalized over the past several decades and is a major property crime as depicted in the media. There are tens of thousands of blackmailing allegations each year that are seldom reported, but often discussed at the water cooler or in the privacy of one’s home.

What does it really mean to blackmail another person? Blackmail, like their laws, can range from something very basic: “If you stop seeing me, then I will make sure you will lose your job.” Much larger cases may look something like threatening to publish and/or distribute nude photographs/images of an alleged victim unless certain terms of an agreement are met.

Often, the terms “blackmail” and “extortion” are indistinguishable, and they are similar by the letter of the law, they don’t always mean the same thing. As previously indicated, blackmail references some level of compensation, where extortion generally involves some level of physical harm or the threat to physically harm another. Although both involve “threatening” another, one is specific to physical harm.

In the State of California, there are five primary types of extortion, which are forms of Blackmail as Blackmail is a form of extortion. California Penal Codes 518, 522, 523, 210, and 526, all outline the elements of this charge.

The primary Penal Code is 518 under California law and this simply indicates that this may be charged if an individual obtains property without the consent of the rightful owner and does so by some form or level of force or threat to use force.

‍PC 523 is extortion through correspondence which is threatening in nature. An extramarital affair is generally a great example of this offense when one person in the party drafts and sends a letter to the other indicating that if they don’t pay a monetary amount, then they will tell their spouse.

Finally, PC 210 is when a defendant poses as a kidnapper and demands a ransom in return of a loved one or acquaintance. This is accomplished through demanding a reward in exchange for, while falsely posing as a kidnapper.